Kick off Benchmarking for the Entités Territoriales Décentralisées of Uvira Territory

As part of the implementation process of the Ensemble pour la Sécurité et la Paix au Sud-Kivu (ESPASK), project activities, VNG International in Uvira launched in June 2021, the Benchmarking approach for the animators of the Entités Territoriales Décentralisées (Decentralised Territorial Entities, ETD) of the Territory of Uvira and the providers of various services (security and development) at local level. The wonderment and excitement that punctuated this learning process, although in its launching phase, deserves to be addressed and shared.
ESPASK, a constellation of efforts and approaches for inclusive local governance 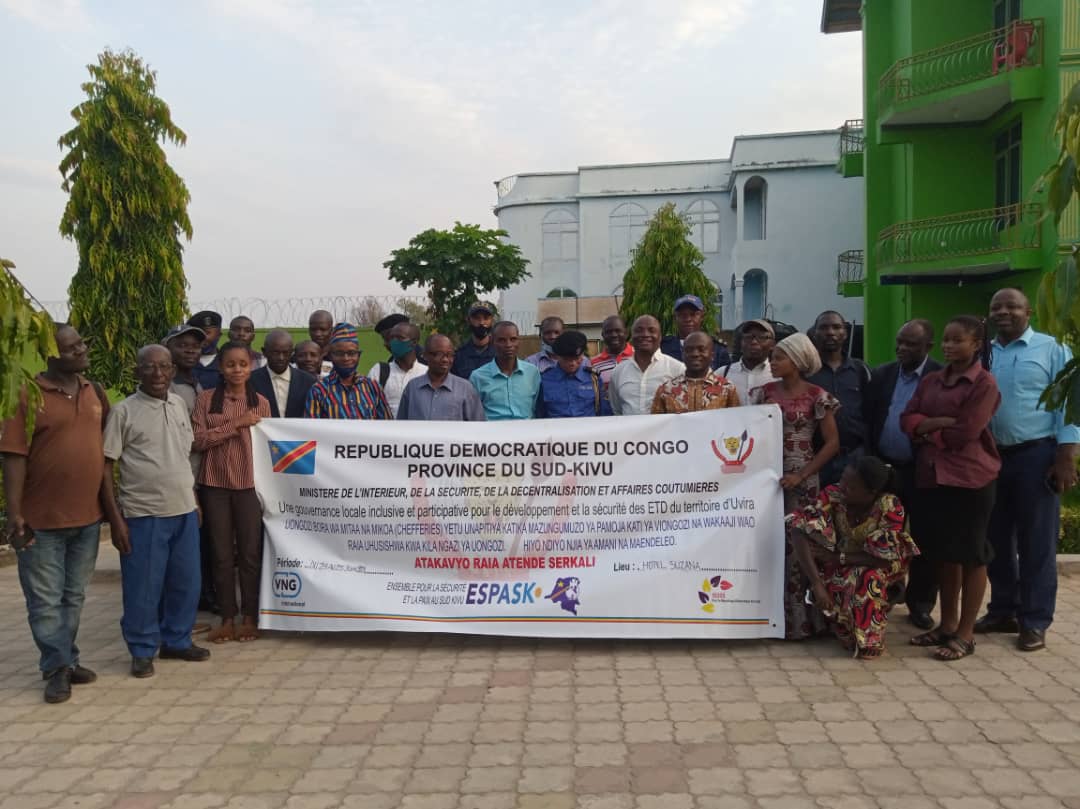 The ESPASK consortium's intervention strategy focuses on strengthening local governance in order to make it more inclusive and participatory, capable of contributing to the reduction of the scale and incidence of customary power conflicts. To achieve this, the ESPASK consortium plans to combine several strategies and approaches. At first sight in the project area, it is clear that certain strategies, such as the transformation of conflicts around customary power management through intra- and inter-community dialogues, have been in use. While building on the achievements of the dialogues carried out in this area, ESPASK advocated capacity building for all actors involved in the implementation of the project and the amplification of democratic dialogues to reinstate trust between local authorities and their populations and to make the authorities accountable to the population. The crowning achievement of all these approaches is to improve the performance and quality of services of the ETDs, enabling the provision of transparent, equitable and accessible services to all citizens (women, young women, men, young men, children, marginalised groups and groups at risk). Cordaid's (consortium leader) 'Results Based Financing' (RBF) and VNGI's 'Benchmarking' approaches are the most prominent.

In the school of learning to establish sound principles of good governance and to achieve the satisfaction of populations seeking access to public services, creativity and innovation in complementary capacity building approaches are required. Benchmarking is an innovative approach that VNGI brings to the table, complementing the other approaches of the ESPASK project; some identify it with VNGI in the consortium. Benchmarking enables participating organisations and their facilitators to improve their performance through the exchange of knowledge and experience and the identification of good practices that demonstrate excellent performance in specific areas. For ESPASK, through this approach, the structures involved (ETD, local authorities, and local civil society actors) learn from each other.

The sharing of basic notions on the Benchmarking approach, as a prelude to the exploration of the questionnaire elaborated on the basis of the key indicators of the ESPASK project and from which the answers have emerged practices to be promoted, has given rise to a better knowledge of this approach and of its added value in local governance.

The crucial stage was the capture of key indicators in the ESPER projects to be learned. These indicators, read in the project and captured as a barometer of the achievement of the expected performance of all, made it possible to appropriate the basic questionnaire to be used as an anchor for the learning. The validation of the questionnaire, which covers aspects of development governance as well as security under the responsibility of the ETDs, launched at the same time the first cycle of the Benchmarking process for the ETDs of the Uvira Territory.

The risks of frustration sensed before the launch of this Benchmarking process have easily given way to an awakening of conscience and a retreat from an operational mode and habits that take away all desires to improve local governance to the satisfaction of the population. "Our day-to-day actions and the way we manage our entities diverge from the ambitions of ESPASK. The indicators and the resulting questionnaire expose our way of managing and show us that we need to change and choose the path of change, there is no point in being defensive", said Mr. MUMA YAO Herman, in charge of the development of the Chefferie de Bavira, a local authority present at the workshop.

Benchmarking for ETDs in Uvira Territory, an exercise as an institutional diagnosis

The selected indicators are intended to measure the performance of ETD facilitators internally. The aim is also to examine both the organisation and functioning of the ETDs and the performance of the ETD facilitators.  The first trends, which emerged from the exchanges followed by the processing of the questionnaire in working groups for each ETD, gave rise to an exercise in institutional diagnosis of state structures at local level. "If I can say something special to the partner VNGI; it is only thank you. Thank you because we have just broken the taboo thanks to VNGI. It has always been difficult for us to look in the mirror and realise what we really are. The good practices, we can't not have them with us now, but the project gives us the idea on what kind of Benchmark is right for us", underlined Mr. BAGIRA KAMBA Bonheur, assistant administrator in charge of the Administration and Finance of the Territory of Uvira at the time of the closing of the workshop.

The portrait of the ideal Benchmark as a learning reference has not yet been completed. Nevertheless, the workshop has helped to paint a picture that is close to the current state of play in the organisation and functioning of the ETDs in the Uvira Territory. The restitution planned for the next meetings will allow to better shape this portrait and the validation of the data provided by the participants to the Benchmarking workshop.