The ESPER program ("Ensemble pour la Sécurité et la Paix à l'Est de la République Démocratique du Congo"), officially launched on December 1, 2020 in Goma, the capital of North Kivu, is implemented in three (3) Provinces, namely Ituri, North and South Kivu, with the following objective: to contribute to stabilization through the promotion and improvement of security and judicial governance as well as social cohesion in the eastern Democratic Republic of Congo. 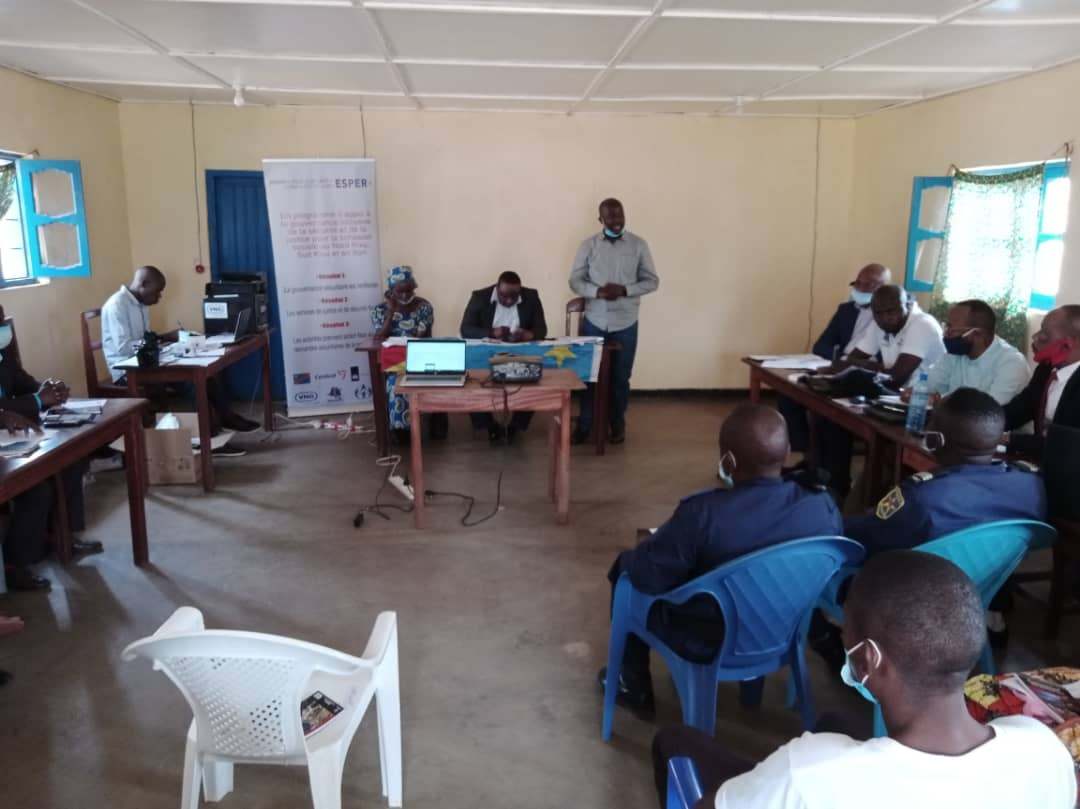 As part of the implementation of the activities of this program in Ituri, during the month of February and March 2021, under the auspices of the Provincial Ministry of Interior, with the financial support of the Kingdom of the Netherlands and the technical support of VNG International, workshops for the negotiation of partnership framework agreements with security governance structures, including Comité local de sécurité, hereinafter "CLS", of the Territories of Djugu, Irumu and Mahagi were organized.

These different sessions were coupled with capacity building of the Security Committee members on the functioning of the CLS and CLSP (Conseil Local pour la Sécurité de Proximité) as well as on the monitoring of the implementation of the security action plans of these entities previously elaborated under the project of the Integrated Consortium for Stabilization and Peace in the East of the Democratic Republic of Congo, abbreviated as CISPE, financed by the Kingdom of the Netherlands.

In addition, this activity has set the objective of supporting and assisting the CLS in framing the inclusive participation of representative layers of the local populations in the security and stabilization process focused on the inclusive implementation of the security action plans of each territory, in order to enable the CLS to achieve the performance required by the performance-based funding contracts.

The negotiations concluded between the above-mentioned Territories have, on the one hand, defined the steps to be followed in order to conduct the program in accordance with the standards and rules established by common agreement between the CLS and VNG International. It is in this context that the commitments of the parties, in relation to the expected results of the partnership taken, were trained and equipped in December 2020 in participatory and inclusive security governance under the coordination of the Provincial Governor and the technical support of the Provincial Ministry and the Provincial coaches, by the Experts of the General Inspectorate of the Territory to accompany in a practical way the implementation of the ESPER program at the level of each province.

The said negotiations had the chance to be deepened and amended in a participatory, inclusive and explicit manner between the stakeholders and resulted in the validation during the sessions and the signature of the agreements by the Administrators of the Territories of Djugu, Irumu and Mahagi by VNG International and the Lead of the consortium (VNGI & Cordaid).

On the other hand, the capacity building of security committees and the monitoring of the implementation of the Plan d’action de sécurité (PAS) were able to equip the members of the CLS and the Civil Society Organizations through the following themes: presentation of the ESPER program, organization and functioning of the Comité Local de Sécurité and the Conseil Local pour la Sécurité de Proximité, missions and attributions of territorial authorities in relation to security, vision of the provincial authority on security and local governance, security governance in the management of the territory, stabilization and peace process in Ituri (FRPI and DDRC), Principles of security governance and accountability in the protection of civilians (3Ps and 3Rs) as well as security problems and challenges of the concerned territories.

Presented by the Coordinator of VNG International programs in Ituri, Mr. Jean-Paul Soroba, the ESPER program is designed to contribute to the stabilization and restoration of the rule of law while promoting and improving security and judicial governance as well as social cohesion in the eastern part of the DRC.

To build on the Coordinator's remarks, several other presentations were made to the august assembly to better understand and identify the challenges of the ESPER program as well as the functioning of the security governance structures including the CLS and CLPS.

In turn, the Deputy Director of the Governor's office in charge of political, administrative and judicial matters, Mr. Herve Tibasima, made his presentation on the vision of the provincial authority on peace, stabilization, good governance and the restoration of the authority of the State.

To materialize his vision, he also relies on the contributions of technical and financial partners including VNG International through the ESPER and ESPAD programs.

In his presentations, Mr. Godefroid Kwanza, Provincial Inspector of the Territorial Administration, demonstrated that security governance is an approach or mode of security management used in the Territorial Administration, which takes into account the problems, real needs and expectations of the population at the grassroots level in terms of security and protection. This is done through consultation frameworks involving both state and non-state actors, using appropriate tools such as in-depth analysis of security problems and threats with a view to finding sustainable solutions. The Provincial Inspector also demonstrated that security governance is an approach to the mission of local authorities with a view to the harmonious development of entities at the grassroots.

Regarding the presentation on the CLS and CLSP, Mr. Peter Nzima, Senior Advisor at the Provincial Ministry of the Interior, said that these are the two governance structures and framework for the daily management of intra and extra border security in a decentralized and deconcentrated entity.

The Comité Local de Sécurité is not a legal person. It is an administrative body for exchange and decision making, a framework for consultation between the actors in charge of security at the territorial level, while the CLSP, which has legal personality, is created to improve the relationship and restore confidence between the police and the population in an active partnership that can contribute to the resolution of security problems, within the framework of the Local Police at the level of the Commune, Chiefdom and Sector.

As for the theme on stabilization and the peace process in Ituri, the STAREC Mission Officer, Mr. Jean Marc Mazio, said that despite security dilemmas, it is everyone's duty to create favourable conditions for peace and the restoration of institutional order in the Ituri Province. 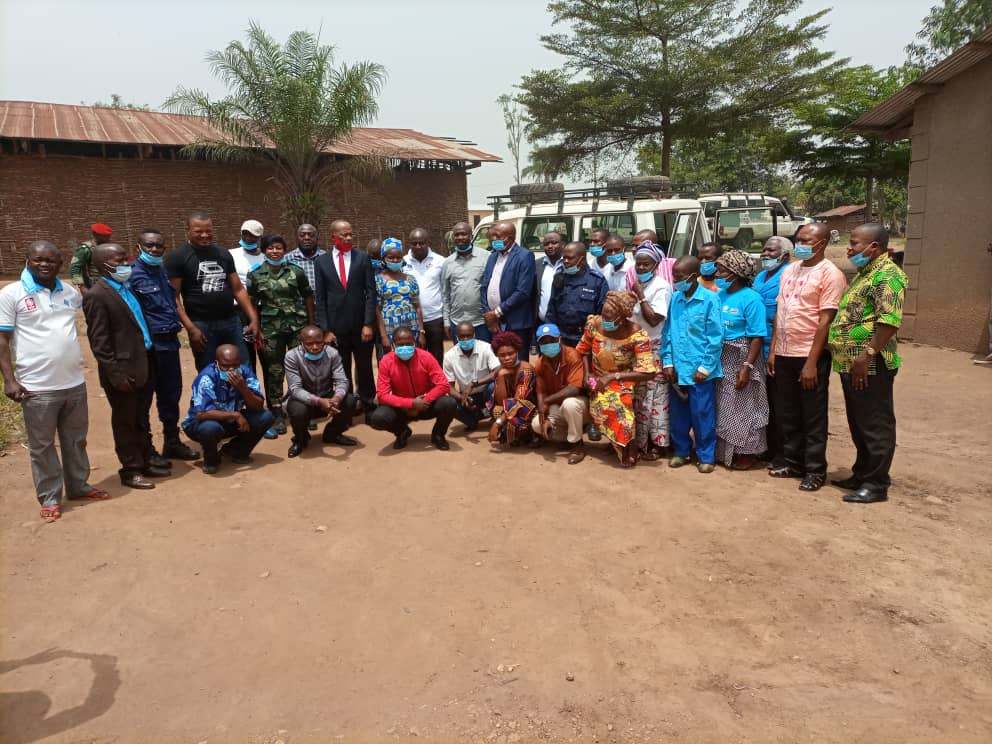 These security dilemmas are the product of the patrimonial nature of society, causing the weakness and fragmentation of defence and security institutions. Hence the need for a new approach to mitigate this, namely Community-based Demobilization, Disarmament and Reintegration, DDR-C for short, with the overall objective of creating favourable conditions for peace, security and development in Ituri Province.

From the point of view of security problems and issues in the territories under analysis, the security of people and their property, as elsewhere, remains the priority for entities with armed groups, including the FRPI, Mai Mai, ADF, FPIC, FDBC Sambasa, ZAIRE, several other factions of CODECO, etc.

The presence of armed groups has had enormous consequences, such as massive displacement of the population, killings, kidnappings, destruction of symbols and buildings of the State, looting, theft of livestock, rape, burning of houses, circulation of weapons, erection of illegal barriers by armed groups, harassment...

This instability also includes the migratory influx of so-called Banyabwisha and Bakonjo subjects, land conflicts of all kinds, administrative boundaries and customary powers, the paralysis of economic activities, and the natural disaster linked to the flooding of Lake Albert, which created security problems.

To close the series of presentations, the Deputy Commissioner of Police, Mr. Justin Bukasa Makelela, focused on the reform of the security sector and particularly on community policing. This is a common security approach that strengthens the relationship between citizens and the police based on 6 principles including the 3Ps "Proximity, Partnership, Prevention" and the 3Rs "Resolution of problem, Responsibility and Respect of Human Rights". These principles allow the police to get closer to the population for a better security management of the entity at the local and provincial levels.

At the end of each presentation, a question and answer session was opened between the participants and the government experts as well as VNG International for a common understanding of security governance and the response that the ESPER program can bring to the stabilization and restoration of state authority and the rule of law in Ituri Province.