A WebTV and WhatsApp groups: or how to promote community involvement in integrated flood management despite Covid-19 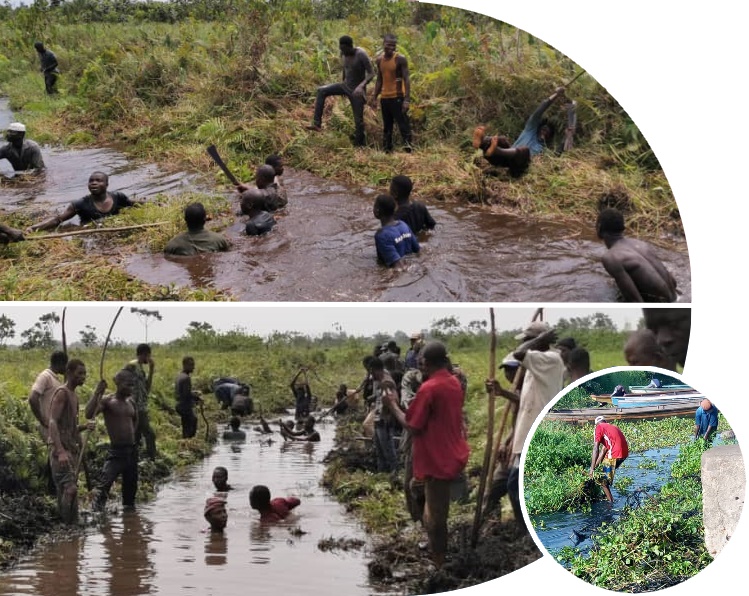 Following the sanitary measures put in place to control the Covid-19 pandemic, one of the consequences for the PSL Eau project in Benin has been the slowing down of activities, and the scaling down of possibilities to communicate physically and to sensitize the communities benefiting from the project. But with the coming floods and the inherent navigation difficulties, it was imperative to maintain the community’s commitment in the integrated management of floods and the provision of manpower. Capitalizing on the possession in large numbers of smartphones by most - young people, women or men, literate or not, and even older people, and the desire of all to stay informed, the PSL Eau project created a WebTV. By producing short, long-lasting videos on the activities carried out, but also on the problems raised during workshops by the community regarding flooding, this WebTV uses the local language to broadcast across the entire community.

In parallel to this WebTV, digital communication through WhatsApp, considered the most widely used network within communities, has become a real sharing and discussion canal on integrated flood management (GIC) at the local level. Following a training on the use of social networks in the framework of PSL Eau's activities, 14 WhatsApp groups including men, women, young and older people were created at the pilot action site level, and managed by community members. By joining these groups, VNG International Benin facilitates the animation of the terroirs on flood management, and creates sharing opportunities of activities and results through questions – debates and various views, tips and ideas sharing, audio and video produced by the WebTV – in order to raise awareness, encourage and adapt on other sites. The different problems are discussed, and solutions are provided for the planning of endogenous actions. The relay is ensured through other WhatsApp groups and through the contacts of pilot action site groups’ members. As members of the WhatsApp groups are also members of other formal and informal socio-economic groups, they relay information by word-of-mouth and through feedback during group meetings, but also to friends or members of the diaspora. These WhatsApp groups are now a virtual meeting place for site users.

Since the launch of these two tools, the progress is noticeable, and changes induced are notable in the project areas. First of all, animation activities on the terroirs regarding flood management, and the communication of community early warnings on flood risks continued despite the rather difficult context related to Covid-19. Secondly, the community works in the decluttering of waterways have benefited greatly from the media communication generated by WhatsApp groups and the WebTV. In Porto-Novo for instance, the WhatsApp groups, facilitating internal organization, reactivated the dynamism and investment of the local population in the works. At the Djassin Tokpa market, on the Zè site, users of the "Awokpa-Dovinou-Houègoudo-Hotonou" waterway complex have been mobilized. Thus, from 6 people initially engaged in the works, the regular publication of the progress of the works on the WhatsApp groups brought the number of workers to 102, contributing to the decluttering of 13km of waterways. Last year, in periods of high or low water levels, activities were slowed down, numerous hectares were flooded, no cultivating was possible, and fishing was rendered almost impossible, due to navigation difficulties. As soon as the first de-congestion works were carried out by the users, the production of corn, beans, vegetables and peppers resumed in around 2 hectares. Communication via WhatsApp and the WebTV on the first successes observed on the Sèdjè Dénou site have aroused the interest and enthusiasm of the flood-recession farming communities on the other pilot action sites in the project intervention zone, thus indicating good economic prospects for flood-recession agriculture. The number of sites involved in community work to relieve congestion on canals and waterways has thus increased considerably, from 3 sites in May to 9 in September 2020.

To continue this momentum, the communities' social network animation capacities will be strengthened through training and support of people involved at the local level. Likewise, the use of the WebTV and WhatsApp networks to facilitate consultation frameworks on integrated water resource management (GIRE) will be operationalized. But however, the change dynamic brought about by these new forms of digital communication based on the sharing of concrete actions between communities already shows the positive impact of the PSL Eau project initiatives. These changes are also in line with the results that the project as a whole is aiming at. The capitalization, communication of good practices and knowledge sharing, especially through digital means, contributes to the sustainability of the achievements and the appropriation of the actions by the local population. And indeed, the spirit of this project is based on the development of concrete actions, and on the assurance of their appropriation by the population, for more resilience capacity against floods.