I was wondering whether the first PSC meeting was going to happen?
Just after the Chin National Day events on 20th February, with many delegations from in and outside Chin State and Myanmar still in town and keeping the government officials occupied. 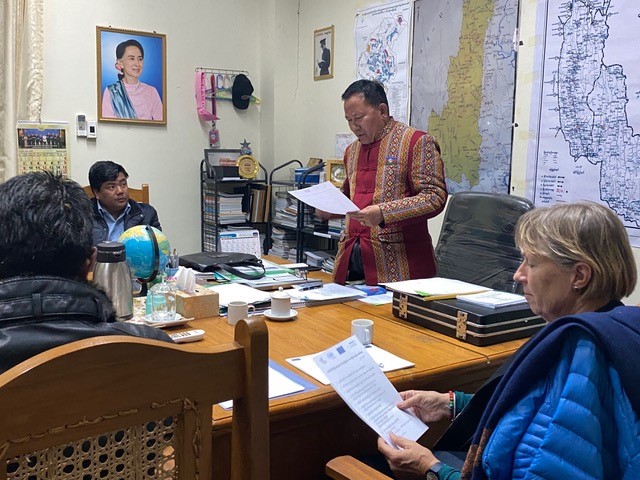 The meeting was planned for Saturday morning, 22nd but on 21st, the day after the festivities, it quickly turned out not possible as the State DAO Director had travel plans. Ohhh. However, he was ready to hold the meeting on Friday evening at 7 pm. Well, why not?! We are in town and at your service!  And determined to make the PSC meeting happen before end of project year 2. Falam DAO / DAC was called to make it to Hakha before the evening, a 2 hours’ drive, should be possible.
The State DAO Director suggested that the Minister of Municipals Affairs should attend. Ohh, how realistic was that gonna be? The Minister WOULD attend but it should start at 5 pm!!
Some last minute preparations and the Loka Ahlinn team was ready to go!.

The meeting started Friday evening at 5.30 pm in the Minister’s office. From the government side were present the EO of Hakha, the Executive Engineer, the State DAO Deputy Director and the State DAO Assistant Director. And yes, last minute the State DAO Director came rushing in.  All MAGIC key government project partners were in the room and Falam DAO / DAC on the way. The meeting could start. The Deputy volunteered to be the MC but the Hakha EO decided that he would be the MC and started reading the agenda.

The meeting started with some appreciative words of the Minister and the State Director and myself. (The Minister always talks about the ASEAN Award of Dawei and wants to have a similar initiative for Hakha.) Then, the Terms of Reference of the PCS was discussed. Kyaw Swa (Program Director Loka Ahlinn) read out the clauses of the TOR one by one and facilitated the discussion. The members shared their views; maybe LASDN project staff could be reduced but the State Executive Engineer should definitely be a member, and also MP’s from Hakha and Falam for ‘checks and balance’.
Mindat DAO / DAC should be included…. Well?? only after expansion is approved.
How many members will the PSC eventually have? We’ll find out from the minutes.

The Service Improvement Plan was postponed till the Falam team would arrive. Meanwhile, Aung Aung Oo (Program Manager Loka Ahlinn) shared the results of the organizational assessment of Mindat and the progress regarding digitizing the local tax system. The Minister read the OA questionnaire with interest, meanwhile attending politely some of his phone calls and discussing at least 4 invitations with his Assistant, who afterwards noted the dinners and other events on a white board.

And then the Falam delegation rushed in, the EO and the DAC Chair, and….: Loka Ahlinn MAGIC LG Officer and the DRI Development Planner….
(and only later I also saw the guy from the State DAO Computer room…. I always wonder what his role is and can’t resist thinking that he is always there to keep an eye on me.).

Falam Service Improvement Plan was the next agenda. I couldn’t understand the discussion, but lively it was. Members stood when they took the floor and it was like a dance of the Falam EO, the Hakha EO, the State Deputy and at a certain moment even the DRI Development Planner, who felt the need to support the Falam EO.
The Falam EO turned out not such a skilled public speaker. When he was asked to give a summary of the proposal, he refused and referred to the document. Well, in front of the Minister?  Seems to be impolite, but they all shared their views openly and constructively. 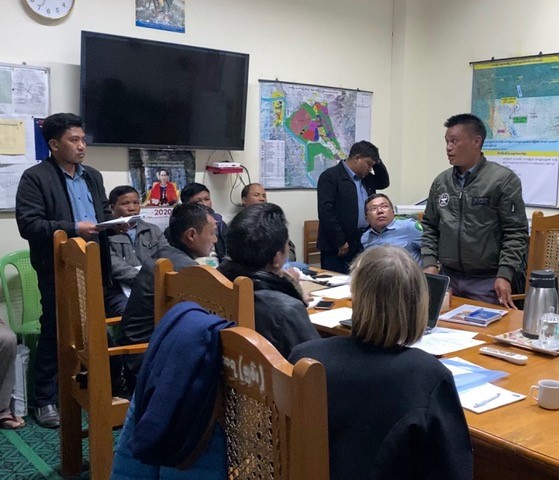 Meanwhile,  a GAD Sr. Officer walked in and started talking to the Minister (about approval of ration for the IDP’s, probably in Paletwa). Well, talking? Had the minister the decency to deal with his phone calls in a silent manner, this gentleman started shouting in his phone.

It went on for some time, whilst the Falam SIP was discussed. A real cacophony! Could the matching grant be transferred to the township DAO’s existing bank account? Should a separate account be opened? Ins and outs of waste management and wanting to reach international standards! Many views and contributions and it seemed to me that not all was clear and could be finalized… When our MAGIC Project Manager handed over a letter to the State DAO Director which he signed. Ohh?

At the end of the meeting, as protocol requires, Kyaw Swa stood up and summarized for each agenda point the issues discussed and decisions taken. And then, the Minister did the same to confirm. The Hakha EO closed the meeting with a dinner invitation; it was 7.25 pm.

That same evening and early next day morning, still ongoing efforts of getting letters finalized and signed. Departure from Hakha was delayed (but useful networking in Cherry Hakha, including with the Minister). When we arrived in Falam we met with the EO and went to the DAO office as another letter still had to be typed and signed…. (meanwhile, I enjoyed my Saturday newspaper in the nearby teashop).

Not sure whether all steps of the Matching Grants Manual and the MAGIC Road map have been followed, but hurrrrahh….. a first Service Improvement Plan has been approved and ready for implementation. And meanwhile, for the MAGIC team, lessons to be learned how to improve the processes for the SIP’s in the other towns.