July 13th 2020.
At the beginning of July, VNG International interviewed Mayors from three foreign cities, as input for an item on international good practices with regard to COVID-19 in the VNG magazine. You will find the interview with Deputy Mayor Nabila Hamza from the city of la Marsa, Tunisia below. Information about the three interviews can also be found (in Dutch) in this article.

1. How has your municipality been affected by the Coronavirus pandemic?

The Municipality of La Marsa has followed the devastation caused by the Coronavirus pandemic in Europe, with great interest. For example, in the affected countries of France and Italy, there is a large Tunisian community, part of which is originally from La Marsa. They would be likely to  spread the virus upon return to the country and city. This enabled the City Council at the end of March to anticipate the effects of the pandemic and to take a series of preventive measures to contain it and minimize its impact on the most vulnerable populations.

In total, the municipality of La Marsa has identified around fifty cases of COVID-19 - all by vertical contamination - and only one death. In this regard, La Marsa is considered a successful example of prevention and management of COVID 19, at the local level.

Considered as an upscale community, royal through its past and its monuments, a favorite place of ambassadors' residences, and commonly called "principality of La Marsa", the Municipality of la Marsa, hides a large underprivileged population, in addition to a large population of sub-Saharan immigrants. Between 3,500 and 4,000 residents are members of vulnerable populations and low-income groups. The districts of Bouselsla, Bhar Lazreg, Jbel Khaoui, Ettabak, Hay Ennasr are inhabited by daily workers, masons, market transporters, second-hand clothes sellers, plumbers, hairdressers, cleaners and waiters. At the beginning of the pandemic, these large groups of men and women often stopped working and remained confined to their homes because of the outbreak. Their little resources have been exhausted over the weeks and the assistance by the Ministry of Social Affairs took a while to arrive. As a result, vulnerable families were threatened by famine or eviction from their home, for non-payment of rent. This inspired the mayor's call for social mobilization and the establishment of a general social and health emergency plan.

2. How has your municipality been handling the dilemma of mitigating the economic impact vs. protecting public health

Deeply concerned about the public health, economic and social consequences of the Coronavirus pandemic on the population and especially on the most vulnerable, the mayor of La Marsa, launched at the end of March an appeal to his constituents. This invited everyone to donate to the municipality, in return for a certificate. These donations went to the municipality’s most vulnerable populations. The call was followed by a great surge of solidarity and fundraising. In addition, an appeal for an amnesty and deferral of rent payments to landlords was also launched by the Mayor. 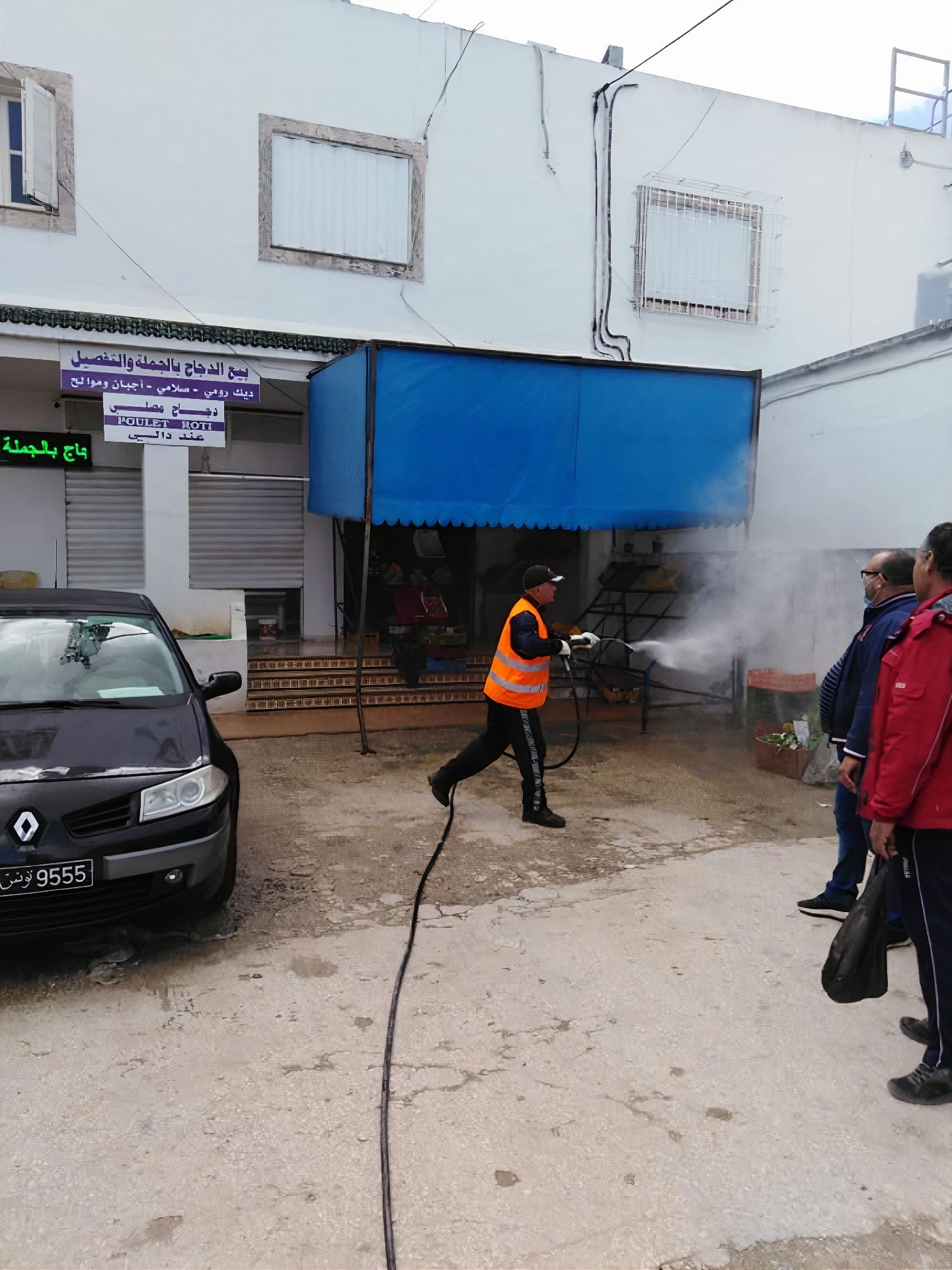 Several preventive health measures, subject to municipal decrees, were immediately taken to contain the pandemic, including: street decontamination, sterilization and cleaning of public places, strengthening of hygiene services, closing of public places, cafes, organization of queues and signalling in front of shops, obligation to wear a mask and call for compliance with confinement and distance.

At the same time, a Crisis and Coordination Unit for interventions was set up. Composed of elected officials, municipal staff and representatives of civil society, this unit has set itself the objectives of:

As a result, a total of 7,808 vulnerable families and 2,000 immigrants have benefited from this aid.

The storage and sending out of food products was organized in cooperation with activists and the civil society organizations. 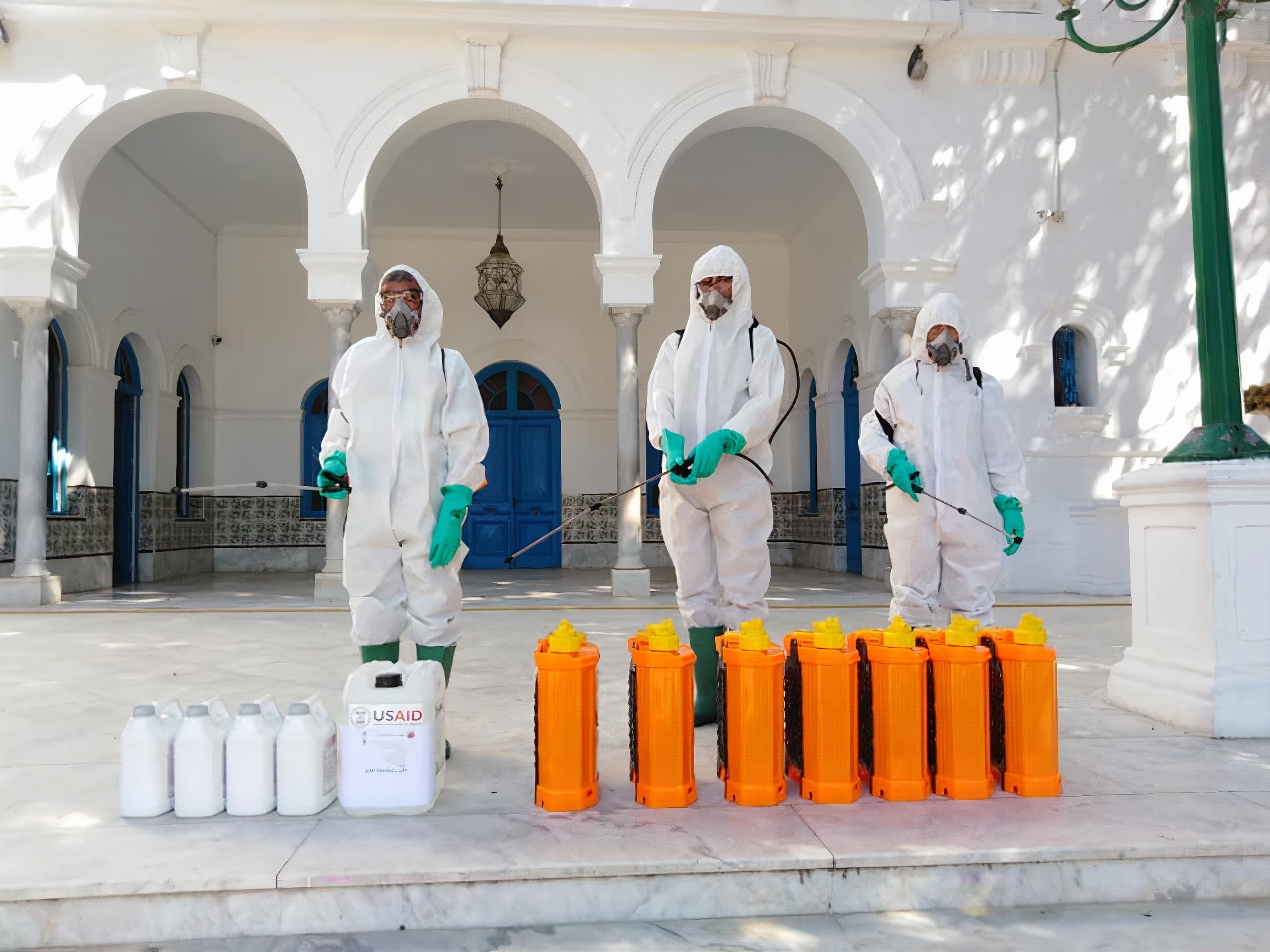 Dozens of volunteers, in collaboration with elected officials, were responsible for organizing, managing and participating in the delivery of emergency packages from local residents, businesses and supermarkets to families in need. To this end, an IT structure has been created to manage stocks and ensure the traceability of this solidarity operation. The donation dispatching was generally carried out after curfew to avoid riots and gatherings. Delivery notes with the names and contact details of the beneficiaries were issued by the municipality in accordance with the database of vulnerable families in the municipality. Environmental police cars, accompanied by volunteers and an elected official secured by the police, then left for the various destinations. A signature was requested from the recipients of the packages, to avoid duplication and ensure transparency. This delivered the following results:

According to many observers, Tunisia has managed the COVID-19 crisis well, by imposing strict and early containment to fight the coronavirus pandemic. A policy that has paid off, since only 45 deaths have been officially registered, for 1,032 people infected.

Today, the risks of a second wave of COVID-19, seems rather improbable to us, however, the municipality of La Marsa remains vigilant and we are now confident and ready to face a possible second outbreak, from the first signs.

4. Do you also see opportunities coming from the ongoing crisis?

The COVID-19 crisis has, indeed, not only had negative impacts. It has enabled Tunisia and the Municipality of La Marsa to put many urgent issues back on the table, including the reform of the health system, economic and social inequalities, discrimination based on gender and violence against women.

At the local level, this health crisis has enabled us:

Participation in an advocacy campaign for the regulation of migrants:

The COVID-19 pandemic has also helped to build a new dynamic for the regulation of undocumented migrants and equal rights.

Many migrants live and work in the uncertainty and precariousness. The confinement to which they were subjected, like the rest of the populations, took place in conditions carrying risks for all. More than ever, the right to regulate undocumented migrants appears to be a necessity based on the universal values of human rights, to which Tunisia subscribes. It is also part of the compelling need to include the entire population in efforts to combat the pandemic.

A coalition of associations, civil society organizations, including the UGTT, the trade union center, and elected officials from La Marsa, was thus formed and launched an advocacy campaign and a series of meetings with the Ministries concerned, including:

These meetings made it possible to particularly address the issue of undocumented migrants and the risks to this vulnerable and marginalized population. The important risk of spread of virus spread in this among this populations was underlined, as this population is isolated in society and unlikely to alert the health authorities in case of infection, for fear of being expelled.

The delegation expressed the urgency of the situation, which cannot wait for the end of the containment, and the need for the government to respond to it. The massive and exceptional regulation of migrants is an imperative and a matter of general interest, otherwise it would be just a time bomb in terms of public health and social issues. Solutions are possible and can combine responses at the level of central and local authorities based on the network of associations. These solutions cannot be implemented without a real awareness of the authorities and the courage and political will of the government to assume this unprecedented responsibility.

These foreign workers, some of whom do not have a residence permit, live an injustice that is not worthy of a democratic country. Emergency solutions can therefore be found in the post-crisis context. Foreign workers are essential today and serve the economy and growth of this country. Without their daily presence in activities essential for everyday life - such as cleaning, collecting and sorting waste, personal assistance, agriculture, health, home services, trades trade and handling – would cease.

The question of the overcrowded permanent camps and detention camps, including Ouardia, without hygienic measures, constitute a danger to the life of the people who live there, and also a risk for the whole population, because they cannot implement containment.

In La Marsa, 35 asylum seekers have been living in a youth centre and have been waiting for refugee status for more than 8 years. These residents are refusals from the UNHCR High Commission for Refugees. They were forced to leave Libya in 2011.

Although a signatory to the Geneva Convention, Tunisia has so far not had a legal framework necessary for its implementation. The current crisis has been a driving factor in establishing this.

5. Many municipalities are working on recovery plans. In the Netherlands these often include plans on how to support vulnerable populations in the recovery phase. Is this an issue of interest to your municipality? If so, can you share a concrete example of an activity that you have undertaken/foresee?

Drawing on its experience, the municipality of La Marsa wishes to maintain the momentum of solidarity and the participatory approach that prevailed during the health crisis, to strengthen its governance and its social action plan and make La Marsa a more united and inclusive city.