After the go-ahead was given in Goma by the governors of the provinces of Ituri, North Kivu and South Kivu, authorising the implementation of the ESPER Programme ("Ensemble pour la Sécurité et la Paix à l'Est de la République Démocratique du Congo") in their respective provinces, it was up to each provincial government to make commitments to support and accompany the implementation of this programme. Through a letter of agreement, the Governor of the Province of South Kivu and VNG International determined the principles and broad outlines of their collaboration.

The ESPER programme aims to promote and improve the governance of security and justice at the local level. The programme advocates for the participation and inclusion of all segments of society as the main loop in the strategic chain, to which the other strategies, namely social and democratic dialogue, performance-based funding and advocacy, are connected. ESPER's vocation places the CLS at the heart of its strategies, which should be supported by various state and non-state actors at local, provincial and national levels. 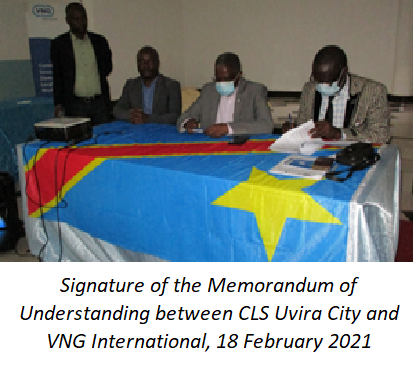 ‘’Security is everyone's business and concerns everyone, our lives depend entirely on it.  The socio-political history of the East of the DRC in general and that of the Territory of Uvira in particular leads us to affirm that the other name for development is security, and its synonym is peaceful cohabitation’’, declared the Provincial Minister of the Interior, Decentralisation, Security and Customary Affairs of South Kivu, in his opening remarks at the workshops which served as a framework for signing the institutional diagnosis of the CLS of the Territory and the city of Uvira.


Before signing the memoranda of understanding, the facilitators and providers of security services at the level of the Territory and the City of Uvira questioned their working system and the functioning of their CLS. An analysis of the organisational aspects (how the services carry out their missions with regard to their attributions and what relations link the different state and non-state actors in terms of security management), and of the quality of the services provided by these CLSs in terms of security, made it possible to identify the sectors that need to be improved in order to guarantee the population quality services that are accessible to all.

Uvira, the newborn in the security governance programme in Eastern DRC

The CISPE programme was implemented from 2015 to 2019, contributing to the stabilisation of four territories in Ituri and three in North Kivu. Funded by the Kingdom of the Netherlands, this programme has produced important results and good practices that need to be capitalised on and strengthened, with a view to responding to the context of Uvira as a new area and contributing significantly to its stabilisation. One of the achievements of this programme is the effective operationalisation of the Comités Locaux de Sécurité and the production and implementation of Plans Locaux de Sécurité.

Uvira, a new area with its CLS painted in local colours

It is clear that the authorities are struggling to find solutions to the many problems of insecurity that plague their administrative entities and make the development of their citizens almost impossible. The process of getting to know the way in which the CLSs of Uvira Territory and City function without any support from the CISPE, opened the way to both awareness of the responsibilities and duties of the security services and to seizing the opportunities offered by the ESPER programme.

In February 2021, ESPER seals the partnership between VNG International and the CLS Uvira Territory and City

The ESPER programme planned to sign a Memorandum of Understanding with the Comités Locaux de Sécurité facilitators for the new zone such as Uvira, as a prelude to the security diagnosis followed by the elaboration of the Plan Local de Sécurité, the primary tool of any CLS.

"Every journey begins with a step and those who want to travel together set the rules of the journey," said the Mayor of Uvira who, after having examined the copy of the Memorandum of Understanding between his CLS and VNG International, proposed amendments for its improvement. He, like the other parties to the protocol, had received copies of the protocol a few days before for reasons of transparency and respect for independence of mind. 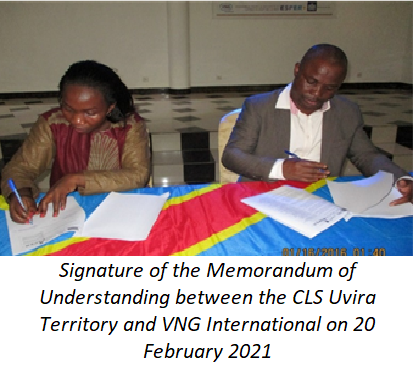 "I congratulate and thank VNG International for this act. Yes, any human work can have its limits, such would be the case of this protocol, I see more its content and its importance, it is a unique experience of its kind that I have just experienced today. Let's give ESPER the chance to hope for a better tomorrow", said the Administrator of the Territory of Uvira with joy and conviction, who explained to the members of his CLS that he has every reason to sign the MoU with VNG International, and is not afraid to engage them in an adventure whose outcome is already promising.

Through these protocols, VNG International and its two partners agree on the principles of the collaborative and inclusive approach to implementing ESPER and its objectives, the basis of the partnership which defines the responsibilities of the different parties, and the commitments of the parties in relation to the expected results of the partnership.

A meeting for democratic dialogue and advocacy

The institutional diagnosis of the CLS was aimed at the effective members of this structure. The aim was to rely on the assistance of service providers to facilitate the exchange of knowledge between the various members of the CLS and to collect key information from certain members of civil society and communities.  The debate between the local civil society actors and the effective members of the CLSs resulted in an objective analysis of the compartments of these Memoranda of Understanding, in relation to the major challenges of security management in the area. For the non-state actors, these MoUs provide an opportunity to positively change the security context in Uvira. They recommended a sincere commitment from the security service providers who are members of the CLS. They also promised to get involved in the CLS exercise and to accompany them in advocacy for policy changes in the area of security governance.

The solemnity of the signing of the memoranda of understanding had the particularity of highlighting the political contours of the whole process of improving security governance. The Provincial Minister of the Interior, Decentralisation, Security and Customary Affairs, on behalf of the entire Government of South Kivu Province, signed the two Memoranda of Understanding. He thus put on record the commitment of the provincial government to support and accompany the implementation of the actions defined in the document.