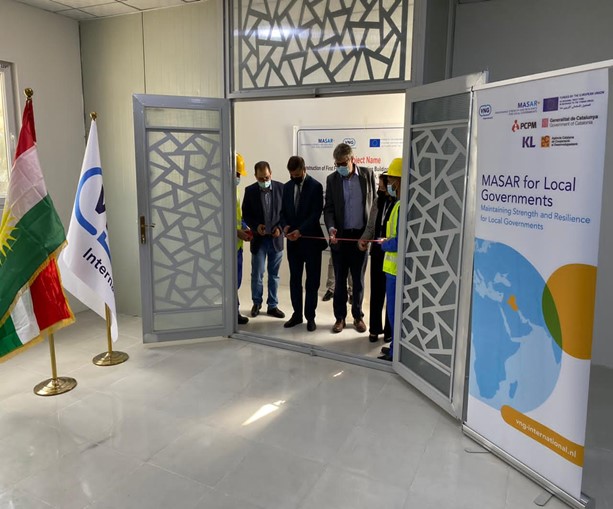 On 3 November 2020, the construction of the first floor of the Kwashe solid waste treatment plant administration building in the Sumel district of the Kurdish Region in Iraq was celebrated during a cutting ribbon ceremony. VNG International has contributed to the development of the plant’s building near the city of Duhok under its MASAR project, funded by the European Union through the EU Regional Trust Fund in response to the Syrian crisis, the EU Madad Fund. The construction work has been carried out in cooperation with a local company.

Before the improvements to the building were executed, the administrative staff of the sorting plant was forced to work in damaged caravans. However, by building an additional floor on the administration building using prefabricated materials, working circumstances have improved for the plant’s staff. The additional floor will be used as office space, and includes a meeting room to improve planning and management of operations and maintenance of the plant. Simultaneously, removing the old damaged caravans has made room for green spaces in the area. Other project activities at the sorting plant are aimed at improving waste segregation and the quality of compost, including capacity development of the staff in this newly constructed additional floor of the administration building.

The celebratory event was held in the administration building in the presence of MASAR’s Team Leader, Mr. Michel Ligthart, and the General Manager of VNG International Iraq & MASAR Front Officer, Mrs. Rawshan Atrooshi. From the government side, the Director General of Municipalities of the Duhok governorate, Eng. Diyar Bahri Rasul, and the manager of the Kwashe Plant, Eng. Hazim Tabor, were present, as well as members of the Kwashe sorting plant staff.