Governing local security In the chieftaincy of Buhavu, DRC 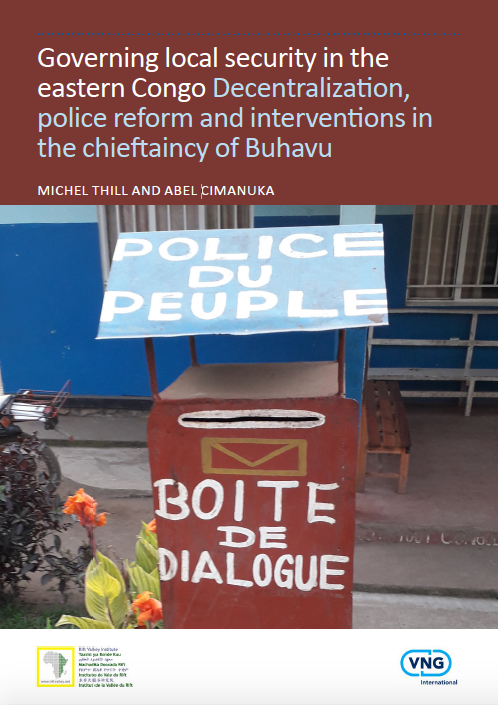 Today, the Rift Valley Institute and VNG International publish “Governing local security in the eastern Congo : Decentralization, police reform and interventions in the chieftaincy of Buhavu”, a research report by Michel Thill and Abel Cimanuka. The report aims to inform the security and rule-of-law programmes of VNG International in the DRC and contribute to the culture of knowledge-sharing and learning between researchers, policy makers and practitioners.

In 2019, the Congolese government pledged to reinvigorate police reform after a pilot programme was shut down in 2014 due to human rights abuses committed by the Congolese National Police. Meanwhile, the government in South Kivu called for the establishment of Local Councils for Proximity Security (CLSP) across the province, coordination platforms dedicated to diagnosing and addressing issues of human security. These processes aim to bring government and security closer to the population in a context where security governance is competitive, fragmented and marked by violence. The introduction of CLSPs in rural areas, however, comes with a host of challenges not necessarily experienced in the cities where the programme was previously piloted.

Governing local security in the eastern Congo explores the implementation of CLSPs in the chieftaincy of Buhavu in Kalehe territory in South Kivu. The report offers valuable insights into how rural entities manage security in the context of resource scarcity, armed groups, intercommunal conflict and competition among state authorities. Although some successes have been achieved, reform efforts have the potential to disrupt prevailing security governance arrangements, which in turn, may trigger resistance.

For those working on and intervening in security governance in the DRC, the report recommends placing human security at the forefront of security-related planning, engaging meaningfully with the police, maximizing the CLSP decree, sufficiently budgeting for security and mobilizing chieftaincies to take up their security responsibilities.