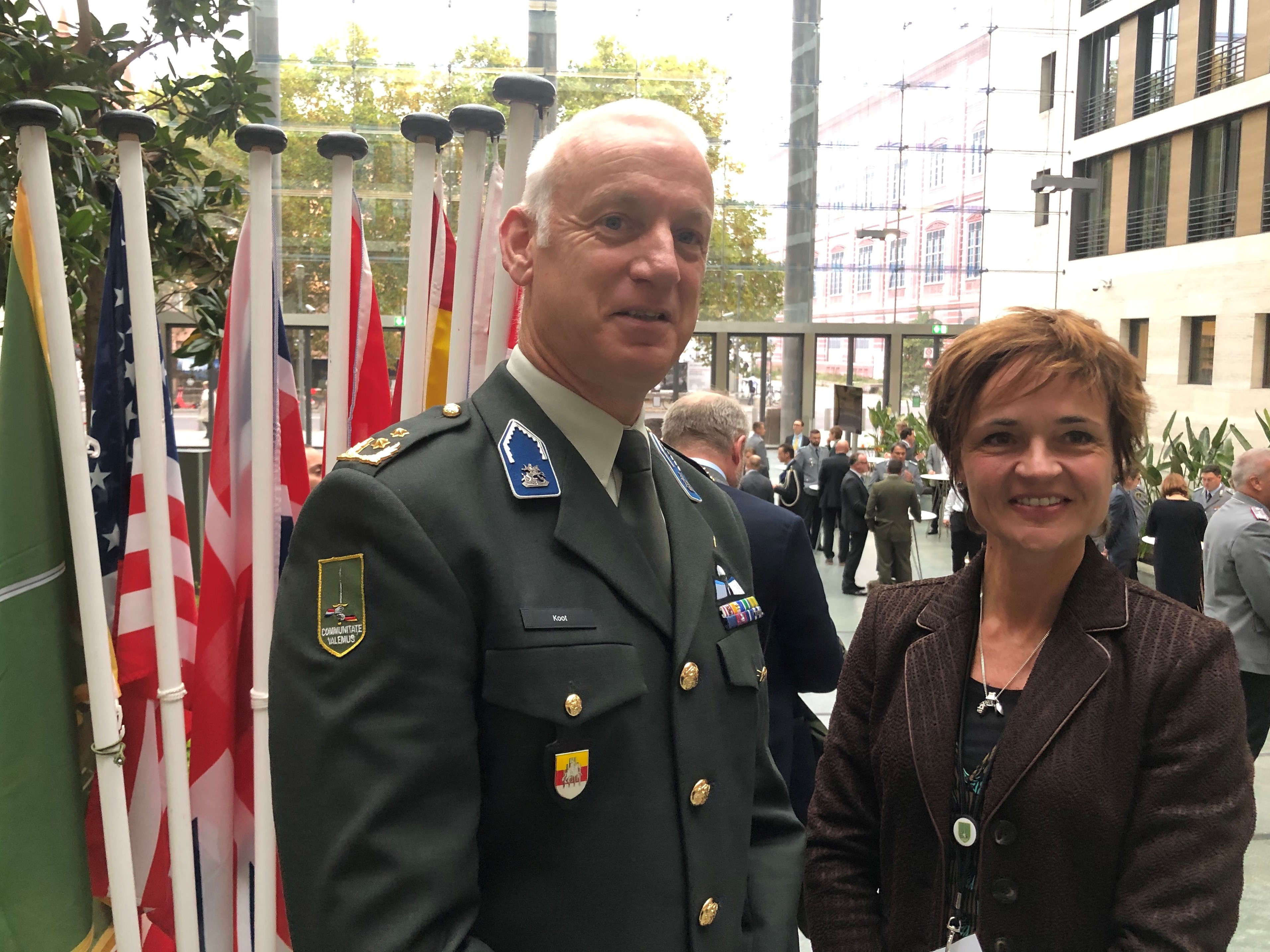 From 14 to 18 October, the civil-military exercise Common Effort was organized in Berlin by the 1-German Netherlands Corps (1GNC), the Dutch-German NATO army headquarters, located in Münster, Germany.

On behalf of the VNG, Linda van Dort, alderman in the municipality of Stichtse Vecht and member of the international delegation participated as well as Volkert Doop, project manager at VNG International. Van Dort holds the portfolio ‘resilience and reconstruction’ while Doop is a specialist in the field of peace and local security in fragile countries.

1GNC must be ready to deploy a military operation within 10 days. In order to be well prepared, 1GNC has organised conferences or ‘exercises’ with a community of civilian organizations. Since the start of these civil-military exercises in 2010, VNG has actively participated and provided advice on the involvement of local governments. The exercise is organized every year and the location alternates between Berlin and The Hague. The theme of the week was "Let's get to know each other before we need each other". Common Effort 2019 was the first in a series of three exercises that focuses on the Sahel region.

In this region, many problems intersect, which over the past years have resulted in widespread insecurity, especially in remote areas where government control is limited or ‘negotiated’. It is one of the poorest areas in the world where health and educational development are far behind. Insecurity, corruption, radicalization are simultaneously both the cause and the source of further dissatisfaction of the population. When an external, violent threat presents itself, there is a reflex in many countries to centralize the response in which the army and national police play a greater role. Certain social groups are often overlooked and find themselves between the hammer and the anvil.

Particularly the rights of women and the interests of young people were an important part of the discussions throughout the week. Although women are highly regarded within the family, women are often not represented in important political decision-making and village council deliberations at the local level. Young people are also often overlooked. These countries have a very young population due to increasing life expectancy and a high birth rate (example: the country of Niger, the average age is 14.9 years and women on average have more than 7 children). This is increasingly challenging as governance remains the exclusive domain of older male elites. The interests of women and young people, such as involvement in decision-making and the promotion of employment, are therefore under pressure.

VNG International is active in many fragile countries, including Somalia, South Sudan, the Democratic Republic of Congo and Burundi. VNG International is also active in Mali, where the IDEAL programme plays an important role in promoting inclusive water management. Over the years a lot of experience has been gained with working with local administrators and civil society organizations in these crisis areas where the expertise of Dutch municipalities is increasingly needed as these countries develop rapidly.

Van Dort: “As an alderman and deputy mayor in the Netherlands, I can understand the importance of their involvement. Sometimes it is easier to get the message across when we speak 'from alderman to alderman, or as a mayor to a fellow mayor'. We notice the extent to which climate issues are high on the agenda in Sahelian countries. "In my own municipality, climate and energy issues sometimes have to make way for other issues, these issues are taken very seriously in the Sahel countries and as opportunities to improve their management of the limited resources available”. In Mali, solar energy means a way for students to study in the evenings because there often is simply no electricity. “It is encouraging to see the work of VNG International in the field of integrated water management in Mali. These are real opportunities to create additional value from our knowledge about local climate adaptation and water management. It can make a real difference."

On Thursday, as the exercise was concluding, it was summarized as follows: many problems persist because stakeholders get stuck in the chicken and egg story. What should happen first: peace, poverty reduction, equal rights, an end to corruption? Of course we can continue to look at all the complex problems in the region from a distance through a telescope, but for example by viewing a local conflict with a microscope, we understand the bigger story. What can help is to focus on problems that we can practically address ourselves. In this way, step-by-step, we increasingly get a better understanding.”

For the VNG delegation, the participation in the Berlin exercise was very positive. During this exercise alone we saw many opportunities to make a contribution. VNG International is currently developing various ideas for new projects in Mali, Niger and Burkina Faso.

The next Common Effort exercise is planned for June 2020 at the Civil-Military Cooperation Center of Excellence (CCOE) in The Hague.